THE CRAZY 38 HOUR JOURNEY FROM SOUTH AFRICA TO NEPAL

SOUTH AFRICA: TOP THINGS TO DO, BEST PLACES TO STAY!05 November 2014Next

DOING KATMANDU LIKE A LOCAL – THREE TEMPLES IN ONE DAY !07 November 2014 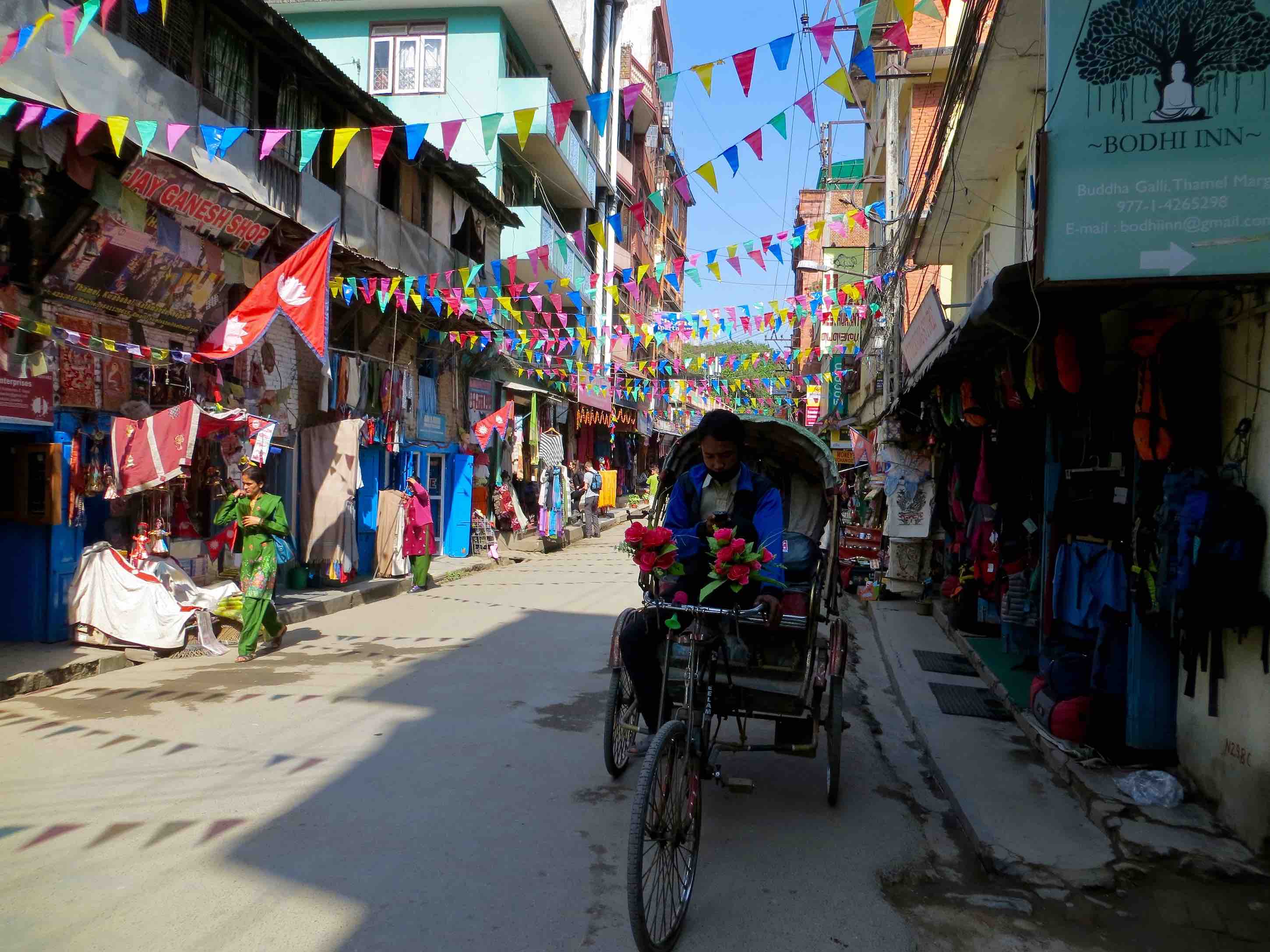 Sometimes it just doesn’t matter where you are – amazing things are happening -and this shows that traveling is by far the coolest thing in the world. Sometimes journeys can be quite exhausting: having to catch four flights to get from South Africa to Nepal while crossing cultures of four different countries within 38 hours. Read here the excitement of my travel trip from South Africa to Nepal.

After a night in Jo’burg in South Africa, the journey continued to Abu Dhabi. While at the airport, I had to us use the restrooms and the cleaner who worked there was so funny because he constantly repeated himself when people stepped into the toilet: “Welcome to my office. Take your time and please don’t rush” – hilarious. I’ve been to many different places and toilets in the world and the people who manage those are sometimes pretty unique characters and that one was definitely one of them.

After a few hours of a layover in Abu Dhabi where I was just wandering around like a ghost graving for food and looking for something cheap to buy at the Duty Free, the journey continued with a flight to Mumbai, India. There, I had to change airports from the international to the domestic airport, which I didn’t know about and only found out randomly. Luckily I had a few hours, plenty of time but not enough to walk there in the dark in the middle of the night. Before I decided to catch a taxi, I knew that there are pre-paid taxis at the airports in India, but I really didn’t know how it works. I got well ripped off paying 15 USD for about 10 minutes driving. I was so pissed off and annoyed but I have to get used to it traveling in Asia again, but adapting in the middle of the night is not that easy.

Flight to Mumbai to Delhi; met another German

Another flight traveling from Mumbai to Delhi and from there to my final destination of Kathmandu in Nepal. At the airport, while waiting for the next flight, I met Benni, a guy from Germany who had just finished his A-level and now going to volunteer in Nepal for a couple of months.

When the plane was finally in the boarding process, I sat next to two Nepalese guys, which was interesting because I tried to interact in a conversation with them – but was unsuccessful, shame because of the language barrier ! It was a short flight again and then I finally arrived in Kathmandu two days after I left – what a relief.

Arriving procedures in Kathmandu but still not at the destination

When talking to Benni earlier, I found out that I had to pay for a visa and was so happy that I hadn’t needed to apply for one beforehand. The arriving procedures like going through customs seemed to take forever, and after waiting for about an hour, it was my turn to pay 30 USD for the visa, allowing me to stay for 30 days – annoying because unexpected but not bad. This is a pity because I was going to stay for 18 days and the visa is shuffled into ranges of 15, 30 and 90 days – at this stage I only had 4 blank pages left in my passport. 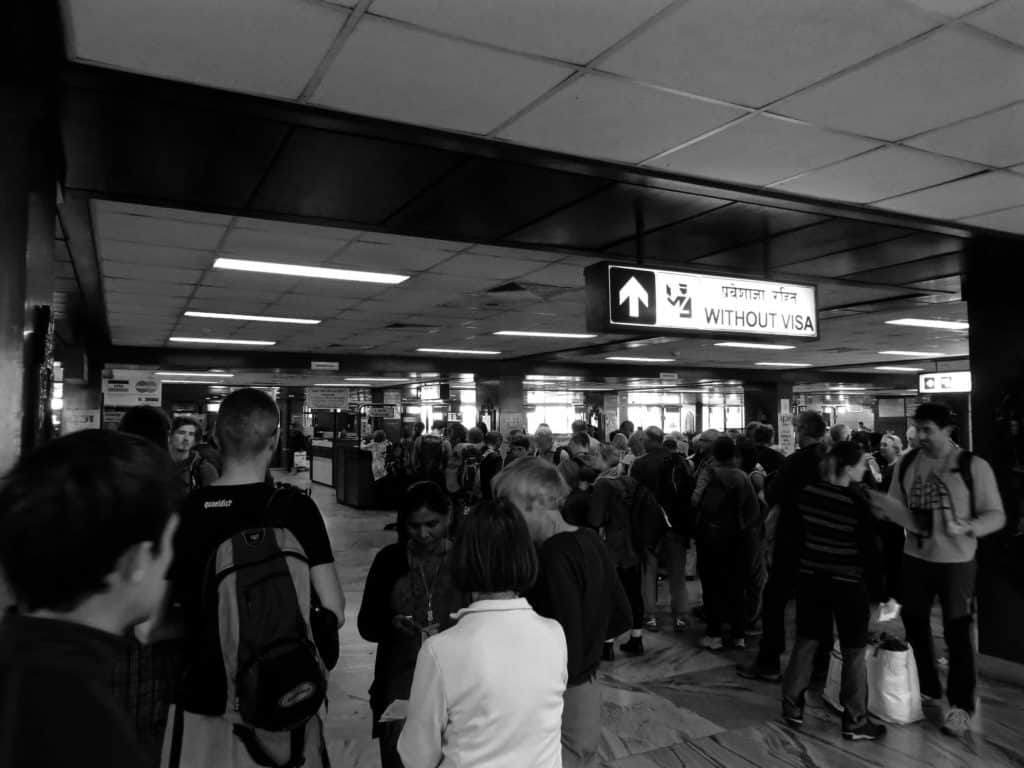 The journey still hasn’t ended yet, but we made it through customs – yeah happy day. Benni and I teamed up from this point on, something which I think is always good when arriving in a new country where there are so many people and things happening within a new culture – I love it. We exchanged some money into Nepalese rupees and then headed out to see how I could get into the center of Kathmandu called ‘Thamel’ where there were supposed to be all the accommodation possibilities. Before leaving, I wanted to see if the guy, who came to pick Benni up was already waiting at the exit – but, of course, he was not there yet. Welcome to Nepal ! 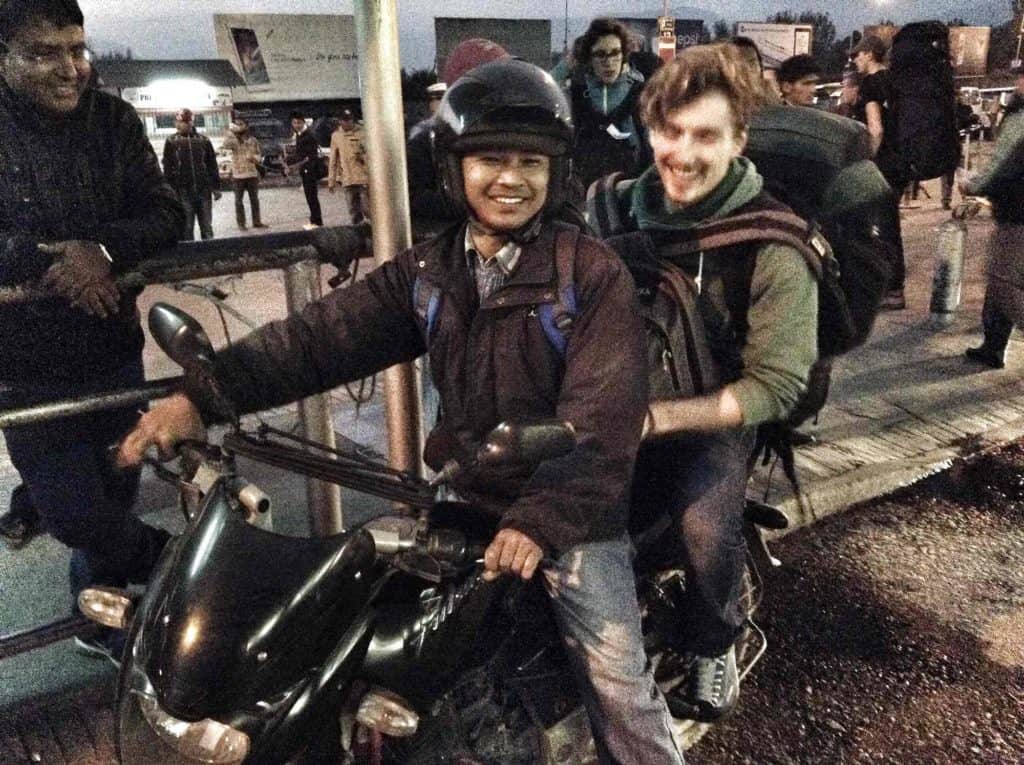 Outside the airport I saw some other backpackers and went over to ask if they minded sharing a taxi. “Of course,” they replied – always better for every backpacker and that’s why I totally recommend as mentioned before looking for others before heading somewhere by yourself. You share costs, which saves money in the long run and it gives you more money to spend on other spendings. We rang the guy who was supposed to pick up Benni; I waited with him and after some time he got picked up in a very traditional mode of transportation with a motorbike; so the couple from Vienna, an American girl and me headed by taxi towards Thamel. As you may find it quite interesting to see how much I cared about someone I had just met but this is also part of being a traveler and of traveling solo – you learn to care about other very quickly an that’s why I waited for him to be picked up.

The taxi journey took around 90 minutes because there was so much traffic – so much crazy traffic believe me – but apparently not for the married couple from Vienna who had just traveled through India. Okay, sorry, I was still impressed and enjoyed the late night journey. The taxi dropped us off at the hostel Alobar1000, where the American girl booked a room in advance – so American sorry, ha ha. (Taxi cost: N550 Rupees = 5,50 USD)

Looking for a hostel

After 35 hours on the road traveling, the married couple and I decided to wander around to check some other places first. Patrick, the guy I met in Drakensberg, recommended a place (Stupa Guest House) and I really wanted to check it out because he said trekkers often leave some gear for hiking the Himalayas and you can take anything for free. This was my plan and the reason I came here, so I had to go there. The Stupa Guest House was pretty hard to find and no one wanted to help, rather they offered a room in their or another place – ahhhh so annoying and not helping. We eventually found it but I didn’t like it and so I headed back to Alobar1000.

The journey from South Africa until arriving at the hostel lasted for approximately 38 hours. Jetlag ? What’s that ?

I checked in and met a big group who were going to dinner in a restaurant, and I can’t say no, especially when someone offers you – and even if I am super tired.

It was a really good dinner and we all had good conversations. I shared the evening with people from all over the world: Australia, England, U.S., Sweden and Canada – lovely.

It’s a long journey from South Africa to cross countries such as Dubai and India to arrive in Nepal, but I think this experience proves really well how amazing traveling can be even if you don’t visit a particular location. The journey itself is the beauty of traveling and I love it.